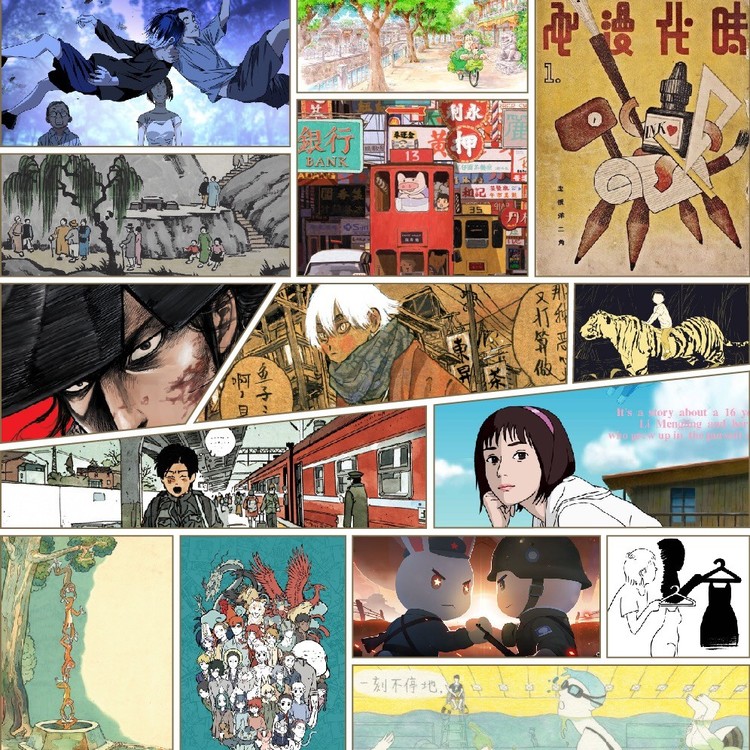 In 1925, Feng Zikai's collection of comics Zikai Manhua first introduced the term “manhua” (comics) to the general public in China. In the past century, Chinese comics have begun to develop their own original style, transitioning from traditional line sketches and imitations of imported styles, and gradually emerging into the international scene. These comics cover everything from themes in ourdaily lives to themes in classical literature, to the fantasy of Chinese martial arts. The digital revolution has brought Chinese comics from ink and paper to the scrolling screen, challenging traditional concepts of "reading" and "drawing.” Nowadays, modern comics are a popular medium of entertainment and art and have a huge influence on their readers.

Curated by Design Society, exhibition Y-Comic-X? showcases the story of China through the evolution of Chinese comics, displaying more than 400 local comic works from 85 comic artists, including 73 original drawings in chronological order. This exhibition is composed of six chapters: Early Manhua (Comics) and Lianhuanhua (Comic Strips), The Golden Age of Lianhuahua, External Influences on Chinese Comics, Globalization and Digitization of Chinese Comics, Independent Spirit, and Comics in the Multimedia Age. It presents the evolution of Chinese comics as a unique form of narration. Chinese comics belongs to the past as well as to the present and the future. 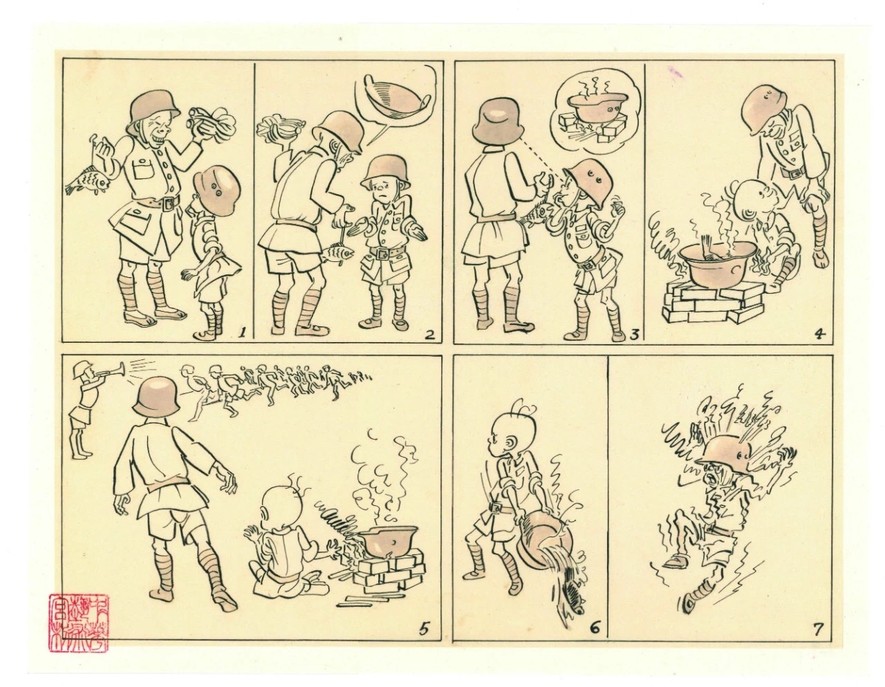 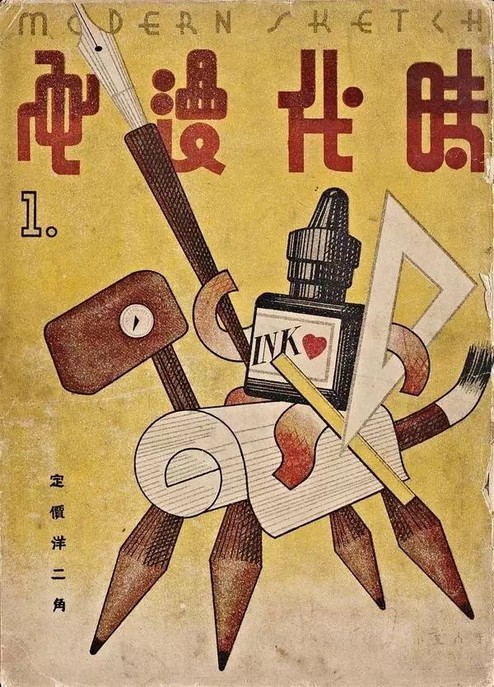 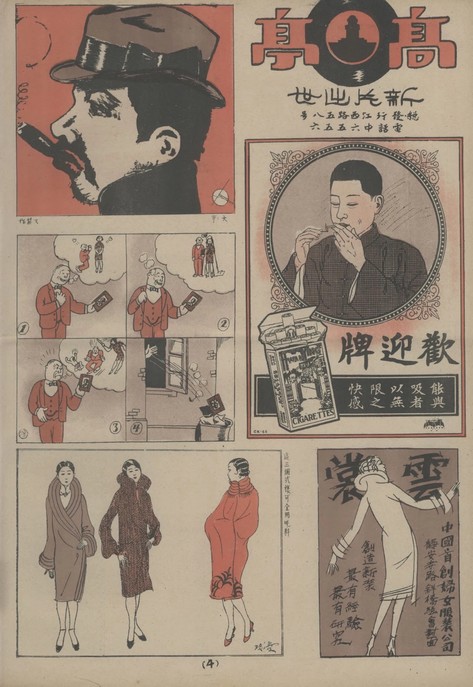 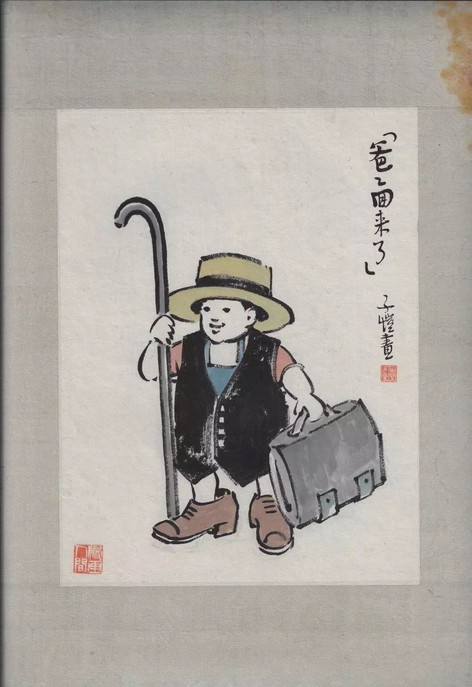 Manhua (comics in Chinese) was a term formerly used by the Chinese literati in the 18th Century to described a type of political and often ironic drawing that appealed mainly to educated elites. However, in 1925, Feng Zikai published his collected works in Zikai Manhua, which popularized the medium by depicting people’s daily lives and ordinary events in society.

Simultaneously, Lianhuanhua (Chinese comic strips) are different from these individual comics in that they consist of sequences of single-page pictures with a continuous plot. They often had text printed on the bottom of each picture in the sequence telling the story. As an important home-grown genre of comics, it had a huge following.

Both early Manhua and Lianhuanhua were mostly created using traditional Chinese techniques, including single-color line drawing, ink painting, and woodblock printing. The style was mainly realistic, and the drawings were often made with a high level of craftsmanship.

Zhang Leping is one of the most renowned early Manhua artists. He is best known for creating San Mao, one of China’s most beloved fictional characters, in 1935’s Shanghai. He later created the long-running comic series, San Mao Joins the Army.

Shanghai Manhua, China’s first comic magazine, was founded in April 1928. It was a satirical magazine put together by a group of avant-garde cartoonists that featured the news and events of their period, which was characterized by invasions and world wars. 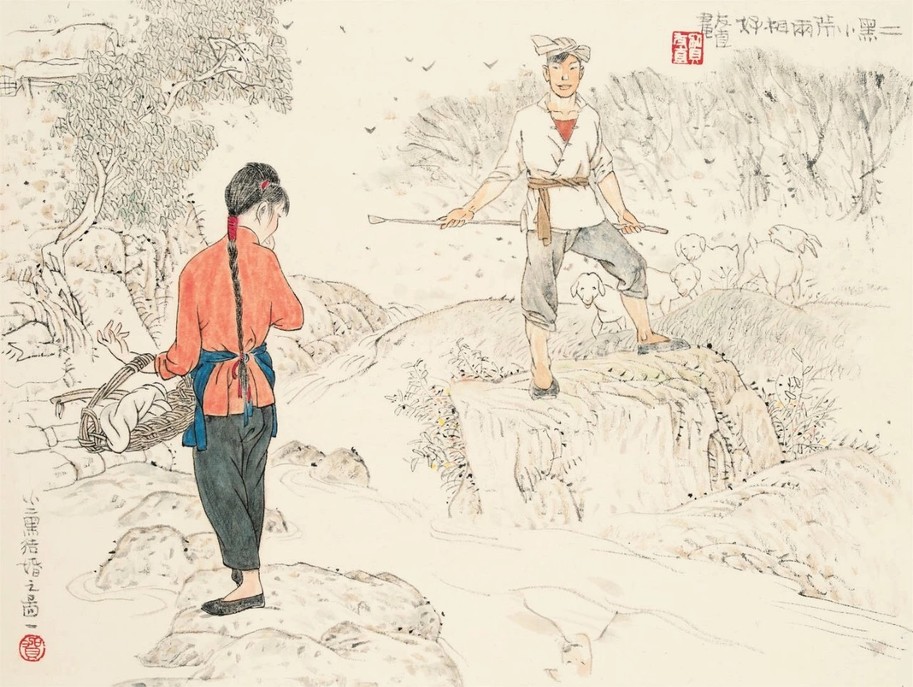 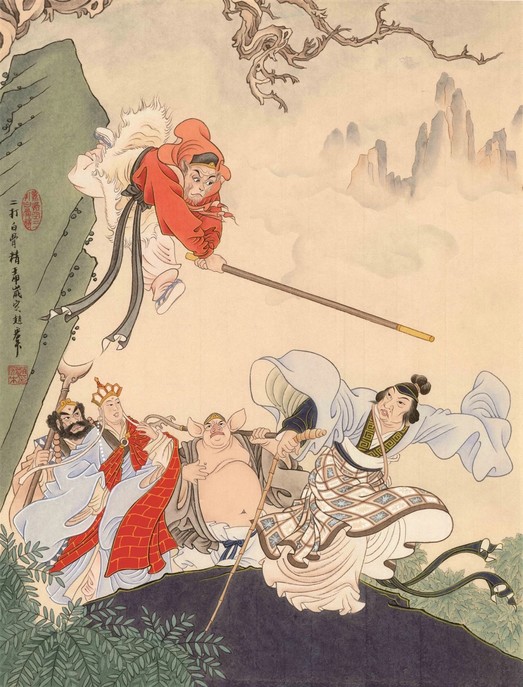 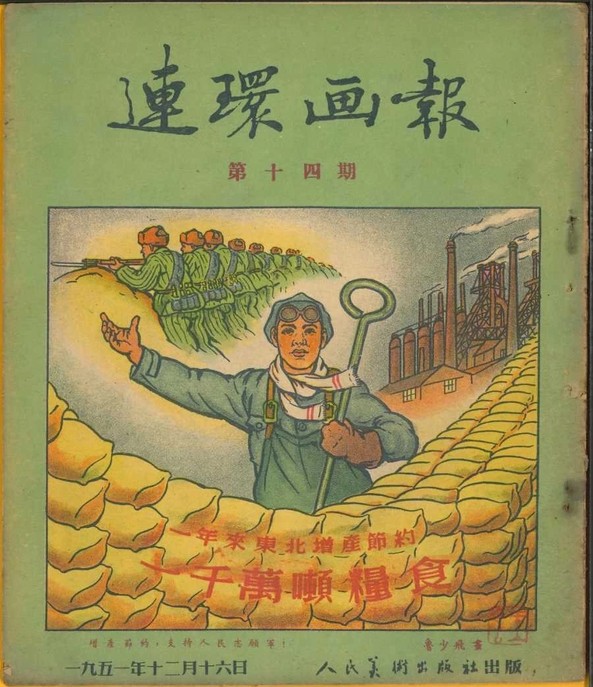 2. The Golden Age in Lianhuahua

Corresponding with the founding of the People’s Republic of China came a golden age in Lianhuanhua, or Chinese comic strips.

As Chinese society settled down, people began shifting their attention to the development of the arts and other cultural pursuits. Receiving support and promotion from the government, comic strips were affordable, widely read, and an influential art form of the time. Lianhuanhua fever swept the nation, and the circulation of popular comic strips often numbered in the millions. Consequently, comic strips began addressing a larger range of topics. While many comic strips had initially borrowed mostly from classical literature, during the period between 1950 to the 1980s comic strips increasingly explored contemporary culture and life.

Outstanding works of the period include Monkey Subdues White-Skeleton Demon by Zhao Hongben and Qian Xiaodai, Reconnaissance Across the River by Gu Bingxin, Colossal Changes in the Village by He Youzhi, Fifteen Strings of Cash by Wang Hongli and satirical comics by Zhang Ding.

In the mid-eighties, with the adoption of the reform and opening-up policy, new types of entertainment such as music and television were introduced from abroad, and comic strips gradually drifted quietly into the annals of history, becoming the memories of generations who had grown up during the golden age of Lianhuanhua. 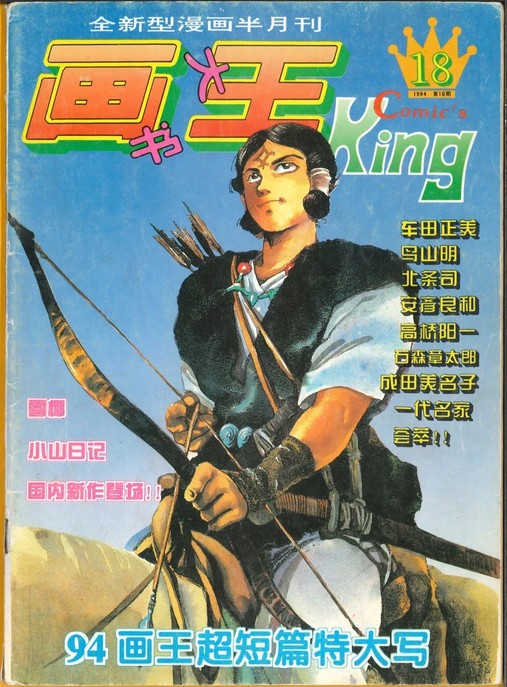 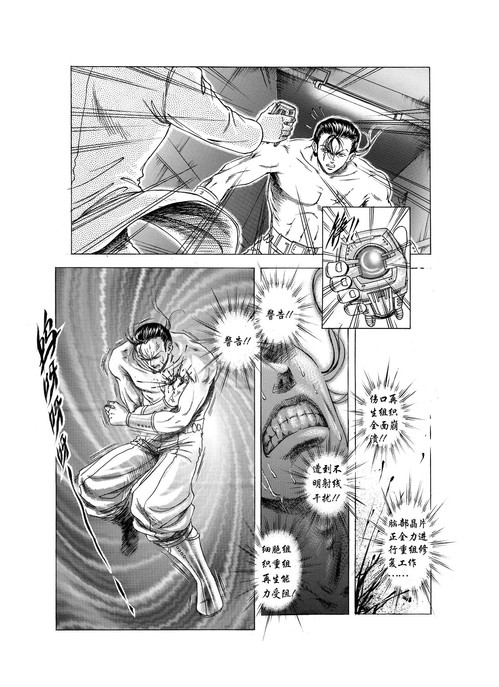 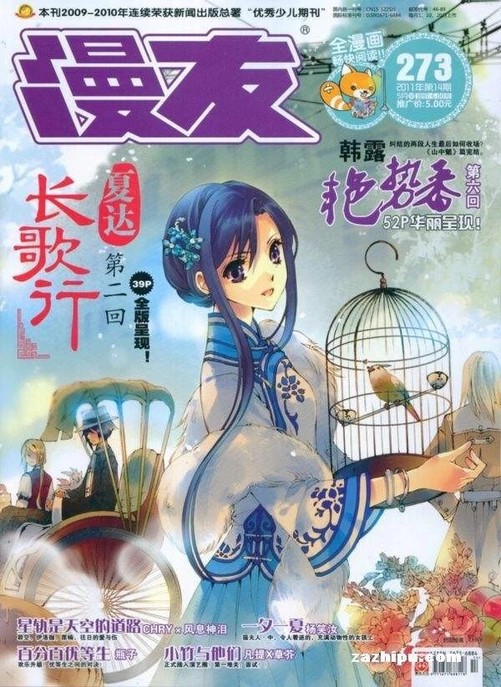 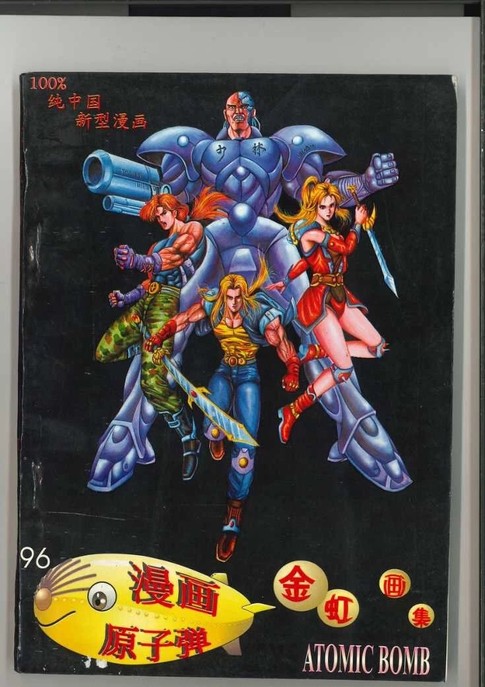 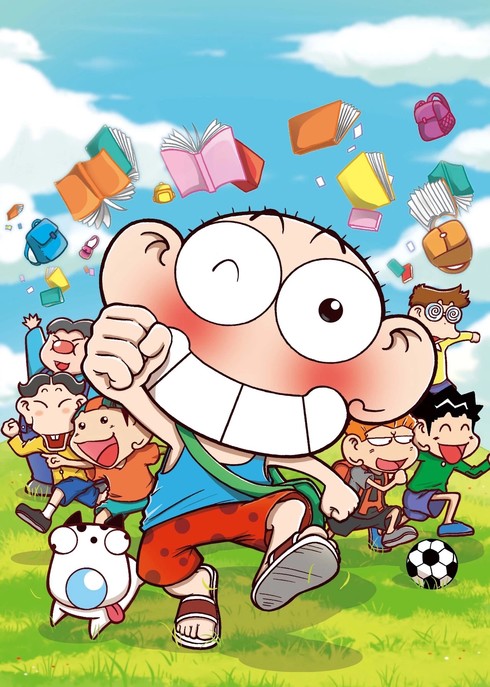 The introduction of Western and Japanese comics to China in the 1990s inspired many Chinese comic artists. Comic King, which debuted in August 1993, is one of the first homegrown comic magazines that publishes international comics to appear in China, featuring both Japanese serial comics and also the works of domestic comic artists. Although the magazine was only published for one year, it had a profound impact on the development of Chinese comics. Artist Yan Kai started to publish his science-fictional comic story Xue Ye in 1994 on Comic King. The next big comic magazine was Comifans. Appearing in 1997, it gave many aspiring artists the chance to showcase their works. Comics by artists such as April (Xia Da) and Benjamin Zhang Bin have appeared in this comic.

The 1990s also witnessed the rise of homegrown cartoonists. Influenced by Jin Yong’s martial arts novels, many comic series focused on Jianghu, or the itinerant world of swordsmen and vagrants, in Hong Kong and Shenzhen. Many of these comics were included in Man Hua Yuan Zi Dan (Comic Atom Bomb), a comic magazine published by Jin Hong Manhua Co. in Shenzhen. In contrast with previous publications, the magazine showcased mostly Chinese comic artists. The same period included Funny School and On Line, witty campus comics that are still popular today. 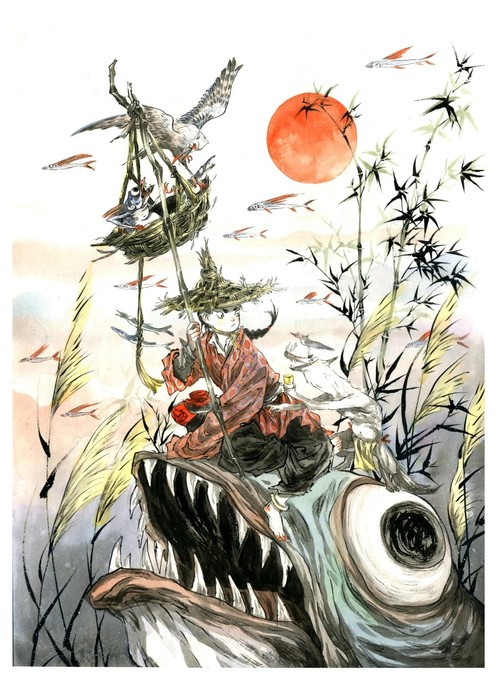 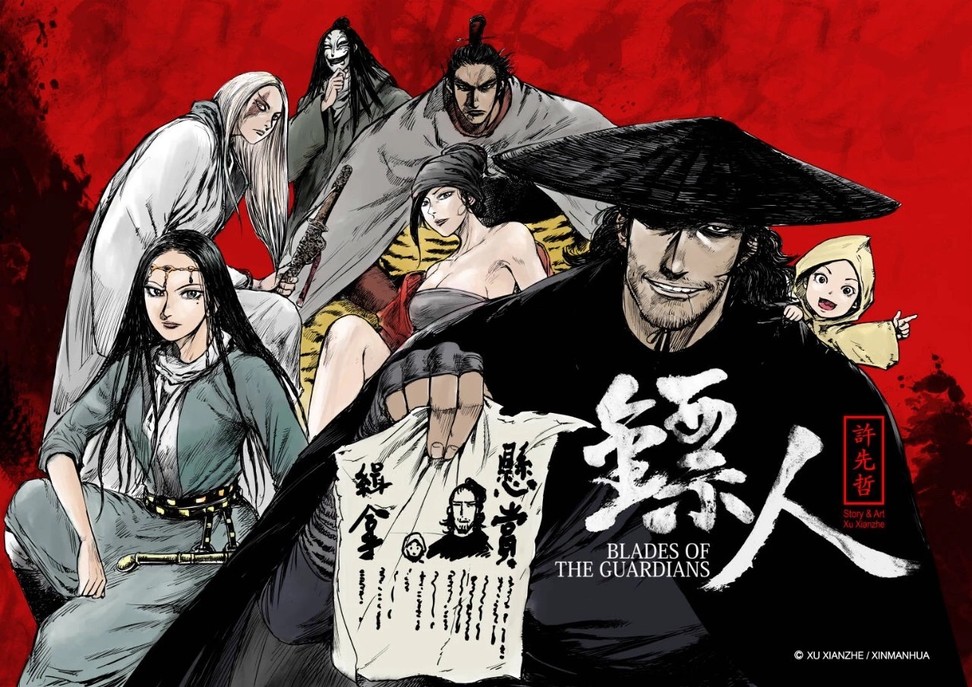 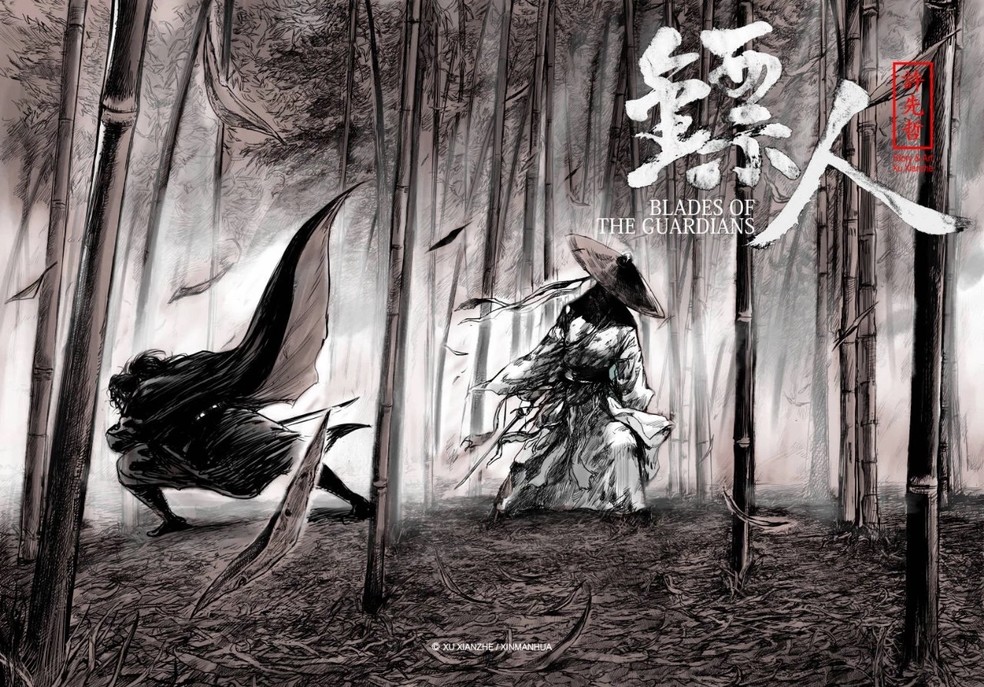 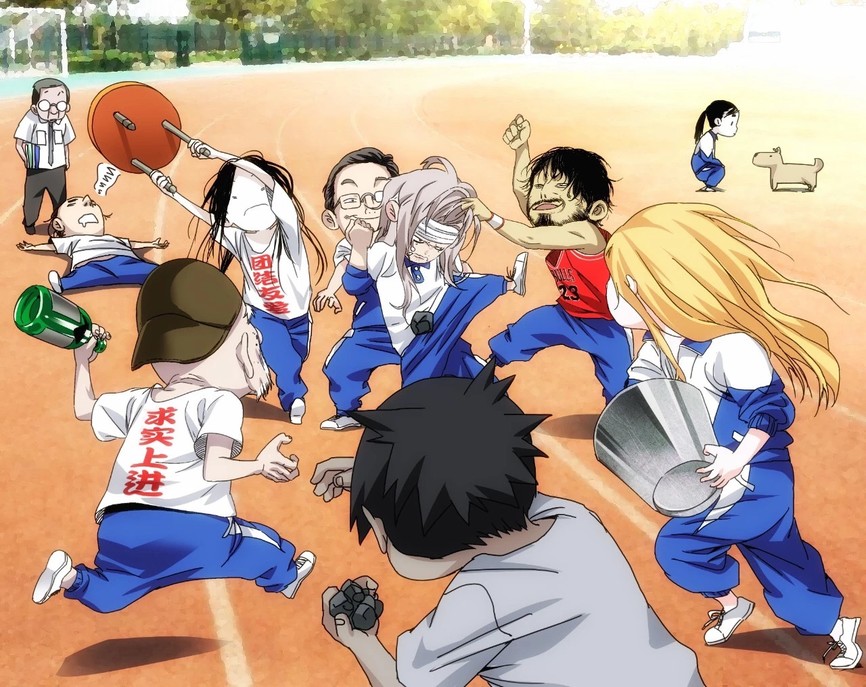 4. Globalization and Digitization of Chinese Comics

With increased globalization, Chinese comics have flourished, and a young generation of comic artists are gradually entering the international arena. Their works are published and exhibited around the world and are well received by their international audience.

Zao Dao, a contemporary artist who has been received well abroad, creatively interprets novels about the supernatural from the Tang and Sung period using pen and ink drawings. Her works are full of traditional Chinese painting techniques and thus have a distinct Chinese style. April, another contemporary artist, whose works are very popular in China, have also been well received in Japanese markets. Yi Ren Zhi Xia and Blades of the Guardians are also two Chinese comics which are highly acclaimed by the Japanese public. Both are stories about Jianghu.

Accompanying the digital revolution, the reading habits of Chinese readers are gradually changing, more and more readers are shifting to online reading platforms. As a result, comic artists are being pressured to create more and more content at a quick pace. This has led to an increase in collaboratively created comic and has resulted in the rise of online comic platforms such as Tencent Comics. 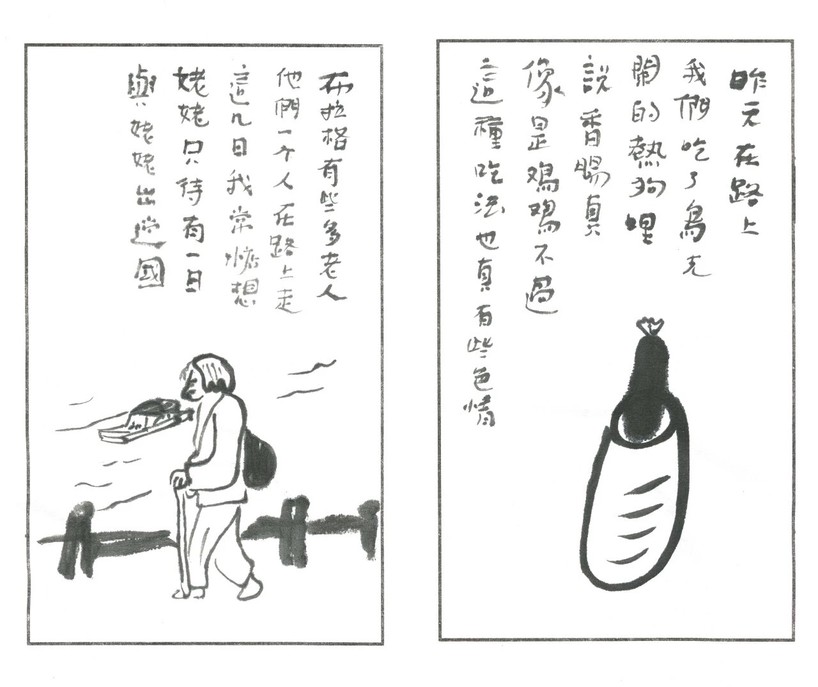 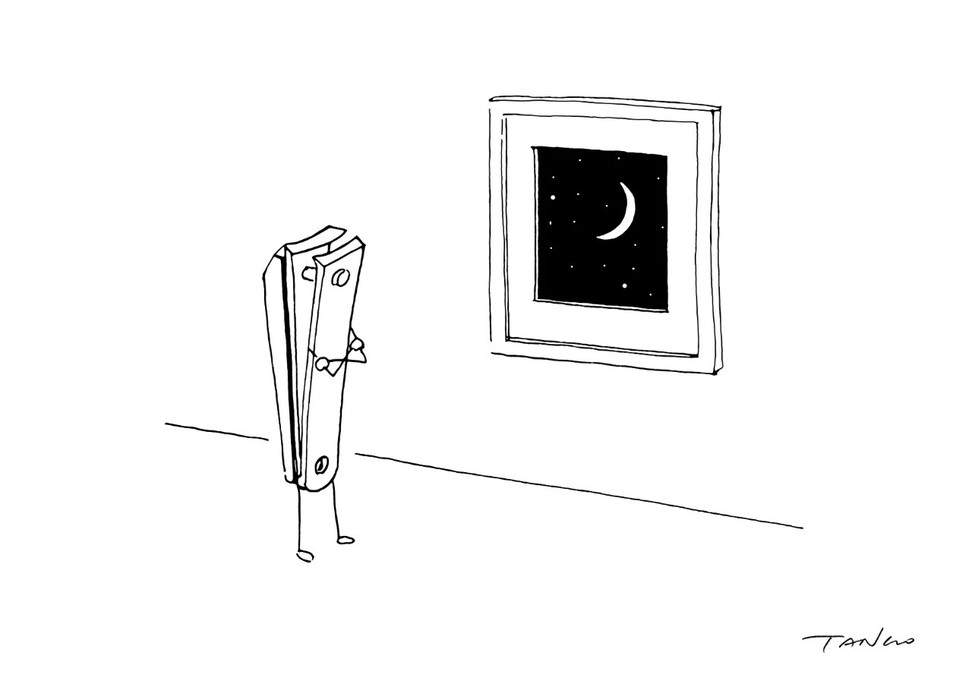 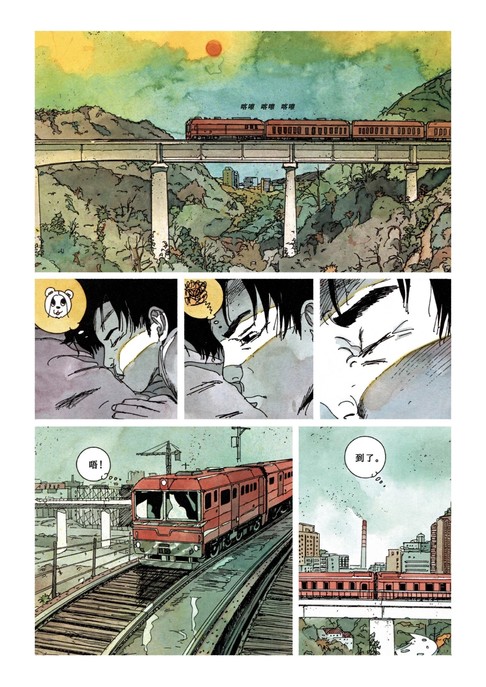 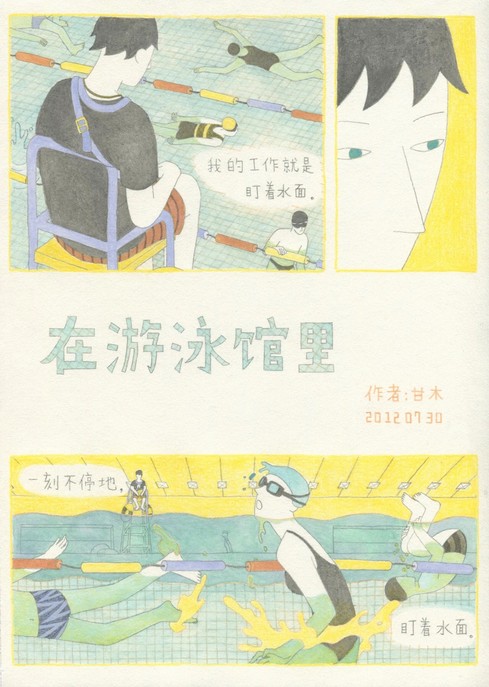 Independent comics is an important part of the history of Chinese comics. Rather than catering to market demand, independent artists focus more on self-expression through eclectic styles and narrative techniques. Independent artists are also favored by many readers because of their uniqueness and they have become the backbone of contemporary comics.

In 2009, led by Hu Xiaojiang, a hundred comic artists banded together to create the Special Comix series, an independent comic magazine, which has put out five anthologies to date. The third Special Comix anthology picked up an award at the Angoulême International Comics Festival in France. For example, artist Ganmu then leaves empty spaces on the canvas. Woshibai’s works reveals his own imaginary universe. Zuo Ma's work often crisscrosses between reality and surrealism, while cartoonist Tango's work is often humorous and witty, and hugely popular on the Internet. Newliu is one of a handful of artists who still insist on using paper as the creative medium. 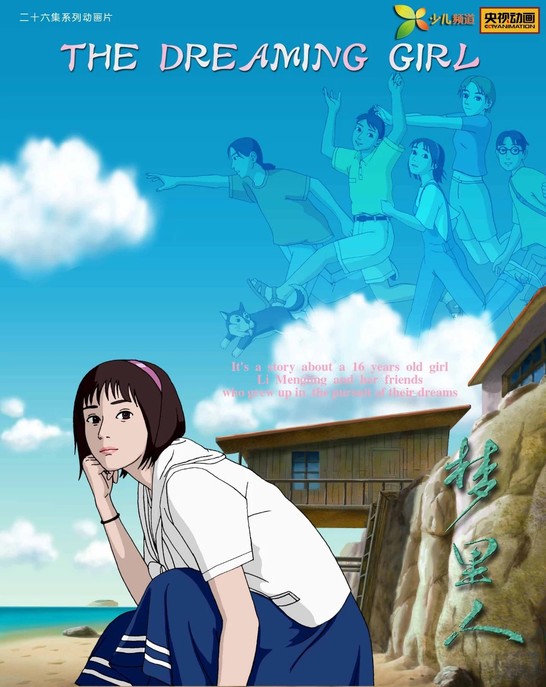 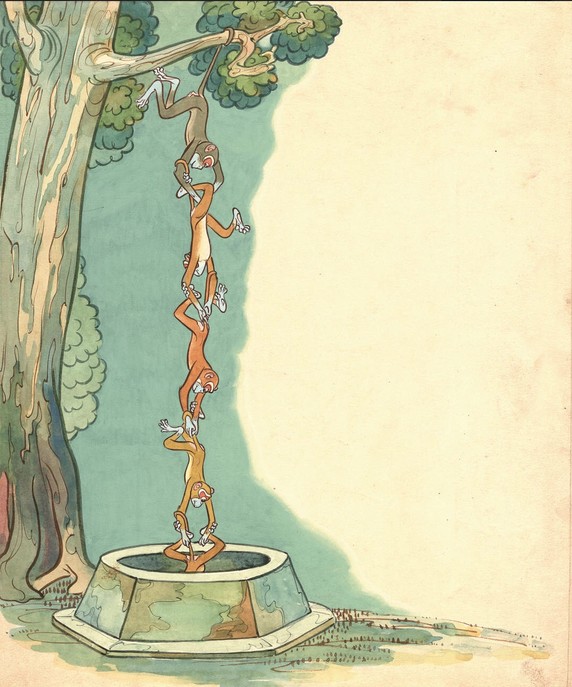 6. Comics and the Multimedia Age

Comics in general have brought new vitality to different art forms. The special narrative form and character design of comics has had a great influence on animation production. In China, from the 1960s animation Havoc in Heaven to the CCTV animation series The Dreaming Girl, we cannot help but noticed the influence comics have on animation.

At the same time, activities associated with comics and their fans, like cosplay, are no longer just personal hobbies in China. Cosplay is becoming more specialized and commercialized, and the influence of activities like cosplay can be seen in many offline activities related to comics.

The King's Avatar and The Grandmother of Demonic Cultivation are two Chinese homegrown comics which have achieved a certain degree of popularity among cosplay enthusiasts. The public is gradually beginning to understand and accept cosplay as a way of self-expression.